Just amazing.
"If dogs don't go to heaven, I want to go where dogs go." 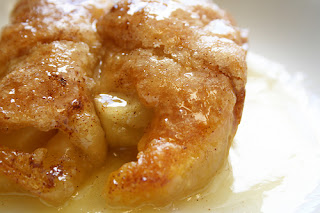 Since I've been getting back into shape this month, the sweets have been few and far between. But then Sara called me FREAKING OUT because she HATES apple pie but had these "Mountain Dew Apple Dumplings" at a friend's house and LOVED THEM.
So, here is the recipe. You can always use apple pie filling in place of the apple if you hate coring and peeling apples (even though it's only 1 apple!).

Separate and stretch out Crescent Rolls.
Peel, core and cut apple into 8 pieces.  Place apple slices onto crescents, roll up and pinch to seal and place in dish. Melt butter and mix in sugar, cinnamon, salt, and vanilla. Pour on top of crescents. Pour Mountain Dew in pan. Bake 35 - 40 minutes. Serve with a side of locally made vanilla bean ice cream! 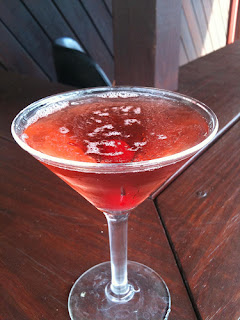 Just dropping in to say I'm still alive. It's been a crazy month so far. Crazy good. Crazy busy.
I re-joined Philadelphia Sports Club  (I started on a 30 day plan but as soon as I discovered I could watch all my favorite cable shows, I became a full member!) and have gone to the gym every day since April 6th. That. Is. A. Major. Feat.
Oh, also, another major feat??? We went to the Metroplitan Diner the other night and I did NOT eat the buffalo chicken spring rolls that Mr. Stiffey ordered. I did, however, have 2 Washington Apple Martini's. I can't be ALL good.
Definitely feeling slimmer and stronger.
However, though I'm so glad spring has arrived, so have allergies.
I'll be writing a longer post to let you know what happened with our agent (s).
But for now, just a quick check in to let you know that yes, I have not drowned in a batter of red velvet.
No comments:

The Most Honest Man I Hope You Never Meet 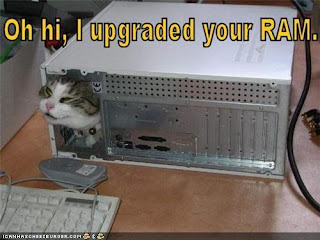 I have a Gateway that decided it really wanted to piss me off and up and died on me about 1 1/2 years ago. I was so ticked, I decided to stuff it in a closet and bought a netbook (Asus Eee PC, pink, love it!).
I'm trying to practice forgiveness and so decided to forgive that little electronic bastard. I retrieved it from the closet and decided to take it to the hospital (computer repair service for those readers who take things too literally).
My first option was this little hut of a shop that, peering through the window on the day I happened by, stopped, and was relieved it was closed because it was dark and grimy and littered with papers and computers.
I started having second thoughts about reviving my Gateway. In my mind, I pictured the owner who surely wore a ripped t-shirt stained with ink and a beard crusted with doughnut crumbs.
I know so little about computers, and, given the public perception of computer technicians (lanky geeks who had posters of Pam Anderson on their walls and for them, WOW (World of Warcraft) is not a game; it's a lifestyle) -  I was: A) Afraid I'd be ripped off and B) Afraid all my bikini pictures would be taken off my laptop and traded around the WOW world.

So, I put the Gateway back in the closet (gentler this time) and decided I just wasn't ready.
And then, serendipity.
I happened to drive by a sign that said "RealTechs." It was close to my home and I thought I'd call - why not?
I spoke with a courteous man over the phone and did not detect any WOW rifle sound effects in the background.  I threw caution to the wind and drove the Gateway to a stone farm house off of 309 in Montgomeryville.
As soon as I walked in, I was relieved.
The office was bright and clean and uncluttered.
The man I'd spoken to was dressed professionally but relaxed, reminding more of a highschool baseball coach than a computer geek.
And his name was Asa. Given that I'm a fiction writer, I'm always on the lookout for cool names and instantly tucked that name in the mental notebook.
Anyway.
I left the Gateway with Asa and he called a few hours later.
The motherboard was shot.
It should be called the MotherFker Board.
Now.
Here is the thing. The AMAZING thing: Asa told me there was a Gateway available on eBay and RealTechs could transfer the insides of my computer into the used computer.
My other option was rebuilding the motherboard which would be extremely costly.
"How much would it cost for the labor to transfer the innards to the used computer?" I asked.
"We'd do it for free."
I almost dropped the bag of groceries I was carrying into the house.
"Free?"
"Yes, well, it would only take a few minutes to transfer it over, so it wouldn't be right to charge you."
So.
Let me get this straight: The office was clean and bright. Asa was professional and didn't have a beard covered with food crumbs, and now he was telling me he'd make the switch for free because it was the honest thing to do?
Wow. And I don't mean World of WarCraft, I mean: In this day and age to find a business that values the customer over the customers money? WOW.
I hope you have a problem free computer life and never have to meet Asa, but if your computer suddenly acts like a drunk that's just been cut off by the bartender, please, please, send a message to those big box stores, send a message to businesses that only care about your money, and send a message to Asa and those like him who value the customer and honesty, and take your computer to RealTechs.
Real Techs - 577 Bethlehem Pike
Montgomeryville, Pa 18936
Phone: 215 - 853-8501
website: http://www.realtechs.net/
No comments:


I joined Philadelphia Sports Clubs  at Highpoint on Wednesday.

I'd been a member there 2 years ago and had loved it until they messed w/ their TV system. For awhile, I lost Food Network, Bravo, and all my favorite channels that kept me on those damn cardio machines. I HATE cardio. What I loved about PSC Highpoint was the fact each cardio machine had it's own TV, so you could watch whatever. Most clubs I've been to have large screens (they have those too!) but you have to watch whatever the TV's are set on. It was one of the things I hated about Planet Fitness.
Now, we dropped our cable at home. The price was outrageous! And I thought I could get more writing done w/out the distraction of cable.  OMG. I was sooooooooooooooooo wrong. I seriously miss it. I miss Food Network and Bravo and HGTV and the Travel Channel. Mr. Stiffy does not miss cable at all (yay for him).
So, I thought about rejoining a gym and PSC Highpoint had a 30$ for 30$ trial period. So, I joined on April 6th.
The TV's now play most of my favorite channels.
Yesterday, I worked out twice! I watched Food Network for an hour in the morning and then went back to later that night b/c there was a repeat of The Housewives of NJ on (and I haven't seen the new season, obviously).
I also lifted - chest and triceps.
I felt fabulous, if a bit sore, last night and this morning - and couldn't wait to go back in the morning and watch Morning Joe! Which I did.
Is it cheesy that I am inspired to work out so I can get my cable TV fix.
Who cares? As long as I'm getting in shape, I don't give a crap.
Tuesday we went out to eat and I had sloppy joe mac n cheese AND these awesome yukon gold cheesy spring rolls. And of course, Monday, we ate at Wegmans and I had 2 asiago & artichoke croquettes that are sooooooooooooooooooooooo fantastic but I looked up the calorie content when I got home and they have 320 calories apiece and 53 CARBS apiece - HOLY COW!
And if cable gets me to the gym, I say; whatever works! 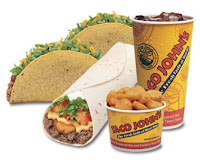