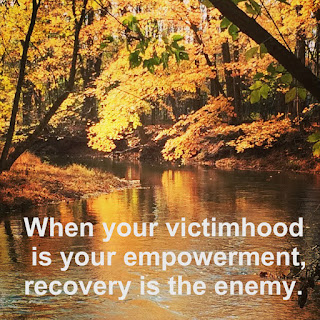 Often we wonder why people continue down the same path and deal with the same toxic situations. Sometimes people are trying to recover, it just takes a long time. However, there are some people who don't want to grow, they don't want to understand why they make the same mistakes, and that's because their power comes from their whinging and  complaining.

Key to understanding the unraveling of Obama's Power at Any Cost, American Be Damned, is an article by Michael Gecan - who worked as a community activists in Chicago and understands first hand the manipulation of the Obama administration:

The first quarter of the Obama administration is finally over. The key issue was not health care, not terrorism, not jobs. Nor was it the promise of “transformational change” that permeated the presidential campaign. The key issue was power—how the power of Washington’s political culture would respond to the power of the Chicago political culture imported by the Obama team.
When the media mentioned the administration’s “Chicago tactics” or when opponents complained that the White House staff behaved like “Chicago pols,” they were saying that the Obama team could be aggressive, tough, even mean.
That mild and broad critique missed the more important features of the Chicago way of doing politics: an approach that translated brilliantly in the presidential campaign and miserably after the inauguration. Here are those features—as I’ve observed them for 50 years, first as a young person growing up in a blue-collar Chicago neighborhood, then as an organizer in Chicago, New York, and elsewhere—and a look at how Washington has responded to their presence.

1)  The Man on Five. The mayor’s office in Chicago is on the fifth floor of City Hall. The Man on Five is the hub, center, source of all good, generator of all punishment. This has nothing to do with charisma. The two mayors named Daley and most other machine mayors have had little personal pizzazz, no speaking skills, and a more transactional than transformational approach. Decade after decade, they have methodically consolidated and centralized power and influence. There is no counterweight—no House of Representatives, no Senate, no independent committee chairs. The City Council is a vaudeville show directed by the mayor. His power is unilateral, one-way, top-down. The key White House staff—Rahm Emanuel, David Axelrod, and Valerie Jarrett—inhaled this culture and carried it with them to Washington.

3)  Elections Mean Everything. The one thing that the political machine excels at is managing the electoral process from start to finish. Selecting and grooming candidates. Buying or scaring off reformers. Marshaling election lawyers to knock out other candidates’ petitions. Using only paid public employees to work (illegally, but with almost no chance of being caught and prosecuted because of the care taken to avoid detection) in campaigns and on election day. Filling vacancies produced by indictments and convictions of insiders with even tighter insiders. Nobody does it better. This is why the presidential campaign did so well in caucus states and less well in those with open elections: the machine thrives on narrow or limited voting situations.

4)  Other People’s Money. The Chicago political culture is run by families or tribes—Daleys, Strogers, Madigans, Mells, Jacksons, and others—that have been on the public payroll for as long as 85 years. Most members of these tribes have never earned a dollar in the private or nonprofit sectors. They have grown accustomed to drawing their salaries from public agencies, sequestering and spending tax dollars, and using their public positions to grow even richer as lawyers and consultants to private interests who need public favors, ultimately drawing pay for their private efforts from the public coffers. Back in Illinois, leaders of both parties—Democrats in the northern part of the state, Republicans in the suburbs and central parts of the state—have grown up in this culture, reinforced it, and prospered because of it. They take other people’s money for granted the way most people take oxygen for granted. Suddenly, the Chicago cohort finds itself surrounded by an opposition party and moderates within their own party who come from states and regions where there is no such sense of entitlement.
Does all this add up to the end of this administration, as some have suggested? Not at all. I’d argue this could mean that the administration, having squandered the first quarter, is finally ready to play.
But first it would have to draft some new players, remove most of the Chicago crowd and shed many of the political habits developed in a machine political environment.
Then it would have to stop playing by the rules set by the permanent elite in Washington and approach the nation’s core concerns in a very different way.
The administration’s proposal to create a new federal agency to hold financial institutions accountable is an excellent example of not doing things differently. It plays right into the hands of the Washington political and bureaucratic establishment. Until the late 1970s, the United States capped interest rates at 9 percent in most circumstances, and banks were still profitable. Since then, the economy has operated without fiscal speed limits. Reestablishing those limits on credit cards, payday loans, and other predatory credit vehicles would do more for the majority of Americans than another new agency or several thousand pages of regulations. The appeal for this basic restraint has been heard even by titans of finance: the CEO of Citigroup surprised the financial industry by recently agreeing that a cap on interest rates, with certain conditions, would be possible.

As presently constituted, the White House cannot undertake these sorts of necessary and far-reaching initiatives. The president packed his staff with those who grew up in the unique political culture of Chicago and Cook County, one of the last remaining islands of machine domination in the nation. When the machine went to Washington, it did what it has always done and what worked back home: try to crush or co-opt opponents, project and promote the image of a mythic leader, tightly control the media, and rely on those who helped win the election. The disarray that the administration finds itself in after its first year is a direct result of the failure of this culture to function under new circumstances.
Different players, with a different approach, can tackle the lingering and deepening problems that plague huge numbers of Americans. These Americans have a mind to work and are waiting to support and lead effective action.
After all, power, properly understood, is still just that: the ability to act.

Related: Obama stacks Department of Justice with cronies from elite law office; not with Justice as goal, but with blackmail.  https://web.archive.org/web/20131101212940/http://mag.newsweek.com/2012/05/06/why-can-t-obama-bring-wall-street-to-justice.html