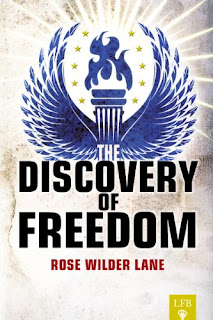 On Rose Wilder Lane: "Her love of America has nothing to do with the jingoism we know all too well. It is a love of individualism, experimentation, risk, entrepreneurship, creativity, reward, and the inspiration that comes with building." - From the Discovery of Freedom by Rose Wilder Lane

More than 6 years I've been researching political movements and history. I've been reading books written in the late 1930's - to the 1970's in a sort of quest to understand history as it unfolded, through the eyes of people as they were experiencing it. And Lord knows we can't trust anything media says or does anymore.

I'd had a quote about freedom from Rose Wilder Lane tucked in a quote book I created from quotes that struck me along the way as I read (the quote/passage is at the end of this essay).

I knew Lane was the daughter of Laura Ingalls; however, I didn't know she was considered one of the "mothers" of the  Libertarian party. She hung out with communists when she was young (in the 1920's) but as she traveled the world and actually visited communist countries, she realized communism is not the answer. Common Sense and Individual Freedom is the answer.

I started to read her book, The Discover of Freedom, in June of 2016. I was amazed at how my thoughts and feelings and ideas imitate Lane's - and yet, I'd had no idea she was such a political (and fiction writer) phenom.

This is what makes me sad about the years I spent doing mind numbing, soul crushing, things; parties, bars, movies, days spent lost watching TV shows (Ok, the tv show Friends was not really a loss because we all need a few breaks now and then), and reading fiction (which is good, but too much and you start to live in a fantasy world) - and in the last few years: getting hopelessly lost on Facebook (do I really need to spend 45 minutes looking at the 'wall' of people that are friends of friends?).

When I discovered Lane, I'd been working on a few different projects and have one major project that I keep refining, re-tuning. It is full of big ideas - big ideas that are very simple. I just wasn't sure how to whittle them down and explain them in relate-able language.

And then I stumbled on Rose Wilder Lane (who's quote had been with me for years, I simply did not seek out information on her nor the book it came from until now) and there was my answer.

No one has ever mentioned her in any of my research. I have Libertarian friends and her name has never surfaced.

There were actually 3 women who gave the Libertarian party some street cred: Ayn Rand, Lane, and Isabel Paterson.

During the '30s Rose Wilder Lane also became a leading opponent of the New Deal. The "real political question" of the '30s, Lane wrote, was "the choice between American individualism and European national socialism."

Unfortunately, as Lane saw it, there was no American political party committed to individualism. "In 1933," she wrote, "a group of sincere and ardent collectivists seized control of the Democratic Party, used it as a means of grasping Federal power, and enthusiastically, from motives which many of them regard as the highest idealism, began to make America over. The Democratic Party is now a political mechanism having a genuine political principle: national socialism." Another way of saying this was to say that, again in Rose's words, "a vote for the New Deal approves national socialism." Unfortunately, however, the Republican Party was "a political mechanism with no political principle. It does not stand for American individualism." Therefore, lamentably, "Americans (of both parties) who stand for American political principles … have no means of peaceful political action." What was needed, Rose believed, was a political movement, which would unite writers, activists, teachers, propagandists, and politicians in favor of individual liberty. A "libertarian movement" — that was her phrase. Brian Doherty reports in his book Radicals for Capitalism ) that he found Rose using this phrase — "libertarian movement" — as early as 1947. He calls it "the first example I've found of the phrase in its modern sense."


I felt I might be insane as I have a ton of binders filled with notes, thoughts, highlights from books, etc. I have notebooks filled with personal essays, and, indeed, blog posts - lots and lots of blog posts. But most of them are scattered (the blog posts) - because I'm easily distractable. Most of us are; we have different people, different hobbies, pulling us in all sorts of direction. It's easy to lose sight of the few things that are truly important.

I was thrilled to learn that Lane had filled over 84 notebooks with her writing at the time of her death (she died in 1968 (the same year I was born) at the age of 81). She was self taught, and maybe that's what makes her work so brilliant; she didn't live her life in a cave, she experienced life and wrote about it.

Here's a book review (from 1943!) for her book The Discovery of Freedom
You can buy her book on Amazon, Barnes and Noble, Ebay.

Here's a long passage from the book that I love - about what ONE person can accomplish:

"And when at last this rebellion compelled the British Government to use the only power that any Government has -- force, used with general consent -- and British troops moved into Boston to restore order, Americans did not consent.  They stood up and fought the British Regulars.
"One man began that war.  And who knows his name?
"He was a farmer, asleep in his bed, when someone pounded on his door and shouted in the night, 'The troops are coming!'
"What could he do against the King's troops?  One man.  If he had been the King, that would have been different; then he could have done great things.  Then he could have set everything to rights, he could have made everyone good and prosperous and happy, he could have changed the course of history.  But he was not a King, not a Royal Governor, not a rich man, not even prosperous, not important at all, not even known outside the neighborhood.  What could he do?  What was the use of his trying to do anything?  One man, even a few men, can not stand against the King's troops.  He had a wife and children to think of; what would become of them, if he acted like a fool?
"Most men had better sense; most men knew they could do nothing and they stayed in bed, that night in Lexington.  But one man got up.  He put on his clothes and took his gun and went out to meet the King's troops.  He was one man who did not consent to a control which he knew did not exist.
"The fight on the road to Lexington did not defeat the British troops.  What that man did was to fire a shot heard around the world, and still heard...
"That shot was the first sound of a common man's voice that the Old World ever heard.  For the first time in all history, an individual spoke, an ordinary man, unknown, unimportant, disregarded, without rank, without power, without influence.
"Not acting under orders, not led, but standing on his own feet, acting from his own will, responsible, self-controlling, he fired on the King's troops.  He defied a world-empire.
"The sound of that shot said: Government has no power but force; it can not control any man.
"No one knows who began the American Revolution.  Only his neighbors ever knew him, and no one now remembers any of them. He was an unknown man, an individual, the only force that can ever defend freedom."
-- from THE DISCOVERY OF FREEDOM: Man's Struggle Against Authority by Rose Wilder Lane, daughter of, and secretary to, Laura Ingalls Wilder,