It is a tremendously important and never-ending problem for the self-governing American people to be not only adequately informed but ever alert and vigorously active in forestalling whenever possible, and combating whenever necessary, any and all threats to Individual Liberty and to its supporting system of constitutionally limited government. In this connection, it is essential to keep in mind that the greatest danger lies in the subtle and gradual, or piecemeal, approach of danger--by which the foundations are gradually eroded rather than by open and outright assault; accompanied by harsh attacks upon all who seek to alert the people to such danger whenever it threatens. This was stressed by Samuel Adams--always in the forefront, as a firebrand patriot, in the fight for Liberty and Independence, for the rights of Free Man through Freedom from Goverument-over-Man--in an essay published in 1771 in the Boston Gazette, signed "Candidus" (quoted exactly as in original text, including emphasis):

"If the liberties of America are ever compleatly ruined, of which in my opinion there is now the utmost danger, it will in all probability be the consequence of a mistaken notion of prudence, which leads men to acquiesce in measures of the most destructive tendency for the sake of present ease. When designs are form'd to rase the very foundation of a free government, those few who are to erect their grandeur and fortunes upon the general ruin, will employ every art to sooth the devoted people into a state of indolence, inattention and security, which is forever the fore-runner of slavery-- They are alarmed at nothing so much, as attempts to awaken the people to jealousy and watchfulness; and it has been an old game played over and over again, to hold up the men who would rouse their fellow citizens and countrymen to a sense of their real danger, and spirit them to the most zealous activity in the use of all proper means for the preservation of the public liberty, as 'pretended patriots,' 'intemperate politicians,' rash, hotheaded men, Incendiaries, wretched desperadoes, who, as was said of the best of men, would turn the world upside down, or have done it already."

The economic is subordinate to higher values not only in such comparative rating but also among Man's motivating influences. Assuredly any adequate examination of pertinent historical materials proves this to be unquestionably true of the thinking of the entire generation in America of the period 1776-1787 and, second to none, of The Founders as a group. They rated their economic interests and security as secondary to their ideals in seeking "Liberty and Independence"--a truth which is highlighted, for example, by the Declaration of Independence, especially its closing words: "And for the support of this Declaration, with a firm reliance on the protection of divine Providence, we mutually pledge to each other our Lives, our Fortunes and our sacred Honor." The record proves they meant it, and equally the almost-naked, ever-hungry and shoeless men at Valley Forge who stained the snow with bleeding feet, yet fought on. 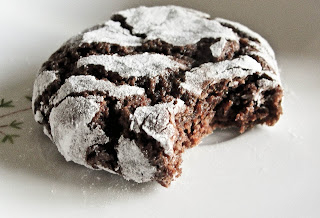 3/4 cup powdered sugar (can also roll in bits of broken candy canes for a peppermint version!)

In large bowl, mix oil, chocolate, granulated sugar and vanilla. Stir in eggs, one at a time. Stir in flour, baking powder and salt. Cover; refrigerate at least 3 hours.

Heat oven to 350°F. Grease cookie sheet with shortening or cooking spray or use parchment paper to line cookie sheets.

Drop dough by teaspoonfuls into powdered sugar; (and peppermint bits if you're going for the mint version) roll around to coat and shape into balls. Place about 2 inches apart on cookie sheets.

Bake 9 to 11 minutes or until edges are set. Immediately remove from cookie sheets to cooling racks.