Nashville - Day One - Standing Next To Dustin Lynch!

After we went to Snooze for breakfast; loving the food there, the service, and the vintage décor, we headed to Broadway! Honky Tonk Central.

Broadway is one long street with tall bars on every floor, many with rooftops. The buildings stand like linebackers, some are flashy, some are more humble, but they are all huddled together, keeping a watchful eye on the drinkers, the dancers, the homeless people with their funny signs (I need money for a hooker. Let's go Brandon. I need money for weed. I need money for a penis transplant, FK Joe Biden!). Watching as the singers walk around with guitars strapped on their backs, as band members roll amps and drums on wheeled carts. They watched as men unloaded beer from long trucks and disappeared into the Honky Tonks with case after case after case.

John and I had the whole street to ourselves, practically. My body was shot through with adrenaline. I'm here! We made it! If I die now, I die happy! (Well, okay, I'd have liked to listen to a band or two, but that was going to happen soon enough!)

The rain was now heavier, and John and I dipped under a closed bar with an awning. Several homeless men were wandering around, muttering to themselves. We live near Philly, so this is nothing new. If anything, these homeless people were more polite, much quieter. And later, once Broadway started filling up, they would whip out the entertaining signs.

Tootsies was supposed to open at 9:30. It didn't. So we ventured into a gift shop looking for an umbrella. They only have the very tall kind, like you'd use on a golf course. Or maybe in a back alley as a weapon.

We were surprised how actually SMALL the area was that we were in.  The Ryman was merely yards away, and the Predator arena was across the street.

We wandered down the street, toward The Stage and John Rich's place, then crossed the street to Kid Rock, Luke Bryans, and Jason Aldeans. (Fun Fact, they are all owned by one corporation). There were cameras set up on the sidewalk in front of Aldeans. People huddled under the roof/awning. People scurrying about carrying microphones.

I ducked in and tried to blend into the small crowd.

"What are you doing?!" John is a rule follower.

"Just trying to figure it out. Maybe we'll see a famous singer!"

I pressed up against the brick wall, and about an arms length away from me was a short guy wearing a backwards baseball cap.

Ok. There are many guys walking around baseball caps in Nashville...but this guy... 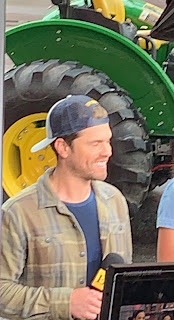 I had to pull up photos of Dustin Lynch on Google.

"Go tell him you're his biggest fan and see what he says."

But I'm not his biggest fan, and at the moment, every song he sang escaped me.

So, it wasn't until they started "rolling" the cameras that we found it, indeed, it was Dustin Lynch!

After we found out who he was, we left, headed to Tootsies.  The sun started to come out, but I stopped at another gift store to inquire about small umbrellas.

Behind the counter were three lanky young guys.

"Dustin Lynch is right next door!" I told them.

"Who?" None of them knew Dustin Lynch.

None of them even liked Country Music.

I couldn't imagine working in a store, in a town like that. It would be like me working at a gift store at a Soccer stadium, where the only music they played was a mixture of Punk Rock and Tool.

Anyway, they only had large umbrellas, so off we went.

We were only a few feet away when a woman chased us down. She had remembered seeing a box of small umbrellas in the stock room. I picked out a red one, and away we went. I was touched by the gracious customer service. And the rest of the day, we saw those little red and blue umbrellas everywhere we went. So her good deed, also paid off in sales for the store!

Almost 10 am now, had only been in town for 3 hours, and I'd had the best Bloody Mary ever (Snooze),  had a celebrity "run in", found a small umbrella (thanks to great Southern Hospitality customer service) and now we were heading back to Tootsies - the tall lavender building that would bet the first official "Honky Tonk" to start off our day.

“Nashville is wicked. It’s like a proper music community, but it’s also quintessentially american. You bump into people there with cowboy hats that spit in jars and call you ‘boy.’ I just love that.” – Ed Sheeran

He had told me once something like that, I didn't listen, and boy was he mad.

I called one of his friends, my heart thudding like the midnight train that flies by our town every night, and said, "Ok, maybe we just surprise him with a few people at MaGerks. Just a few."

Five minutes later I called back; "Forget it. No one. He'll be mad. Maybe not. But Dude, I will be nervous from now until April 4th of next year. It's not worth the anxiety of wondering if he'll be mad or not!"

He always stressed to me: "If I die in the line of duty, I don't want a big deal made of it!" He didn't like Commendations, trophies, etc. He's just the kind of guy; he does a good job, he knows it, the people that count know it, and that's all that matters.

When he texts me at work, that "GUESS WHAT? A few of the guys are taking me to Nashville for my retirement."

The only reason John even knew of Luke Combs or Morgan Wallen was because I played them!

So, I did the only thing I could do...I bought a ticket to go by myself (flights were super cheap on SouthWest - 49 bucks!). If you can't join them, go later and enjoy! I really only cared about listening to LIVE COUNTRY MUSIC. Not about getting drunk and sloppy (I've had about 30 years of practice at that).

Being stuck together for over a year, John learned much more about Country music than he ever wanted to. Now we had Hardy and Ern in the rotation, and even some Walker Hayes (only if he was feeling really generous!) Our local bars, the kind with juke boxes, also really got to know Morgan, Hardy, and Ern. I'm sure Cross Roads and Skyline couldn't have pushed us out the door fast enough to get us to Nashville!

A few weeks into 2022, prior to Inflation and Heart Attack Gas Prices, Southwest Airlines was having a 59 sale to Nashville. Nonstop. The departure times were perfect. I had a credit I needed to use by the end of the year, and asked John if he'd want to go. He said sure.

We were scheduled to leave on April 5th, Tuesday.

That weekend, call it weather, systems glitches, or what you will, but Southwest cancelled almost half a thousand flights. (They weren't the only airline to do so.)

Maybe Nashville was just not in my cards. And in case they weren't in my cards, we eyed a get out of the house since we have a wonderful dog sitter scheduled, to Jim Thorpe. Been there a thousand times, but what's ONE MORE?

But by Monday, Southwest seemed to get it's propellers spinning, and by Tuesday morning at 7:10 am, we were IN NASHVILLE!

I was so excited to see EVERYTHING COUNTY just as soon as we stepped off the airplane and into airport. There was a SINGER singing in a little cafe!

It was raining, but the wonderful Airbnb we were staying in said we could check in as soon as we landed (AMAZING!!!! I know some Airbnb's dislike the "early" request, and we were pushing it with an 8am arrival, but...WOW!! (Here's the wonderful link for the beautiful Jill and Buds Nashville Airbnb ).

Oh, on top of it all, we took our first Uber ride ever. Yes, we've been living in the dark ages.

After we dropped off our stuff, we headed to Snooze East Nashville . Love the decor. Very vintage! I started the day off with a Bloody Mary and some peppered/maple bacon. Our server had just moved from California (she's be the second transplant from CA we'd meet) and was LOVING Nashville. 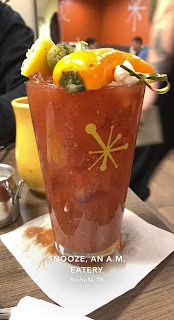