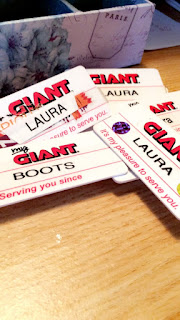 Most people I know who work on the Front End are always looking to leave Giant.
I know very (if any!) people who really enjoy working at Giant. What they do love are most of the customers (unless you work on u scan, then you dislike everyone because computers are the problem, people). I never intended to work there very long, but my *&%$^*( sister-in-law made a snide comment asking if this job was going to "stick." Because I'm a writer, I've been, well, writing. Sporadically. Following through is a challenge for me. I get distracted. I like to do research. I have binders full of research. It's like I have my own University. My education is paid for by grants from my husband (the third one, the one I refuse to take his last name for fear of jinxing it since husbands last as long with me like a meat bone lasts with a hungry dog.
Anyway. Because my in law dropped her snide remark, I set out to prove her wrong; I lasted through many manager changes, cashier graduating highschool to go to college, crazy holidays seasons and winter storms. A front end manager became sick and died a few months later;easily one of the most likeable of all the managers we've known.
I promised myself this was going to be my last year there. I'd adjusted to life there, the money was okay (but far from great). Working at the front desk was by far the best position I'd worked in since I'd been there. But then, literally, within 3 days, my whole life changed.
Years ago, I'd worked as a store detective - loss prevention agent for Bloomingdale's at the Willow Grove Mall. I worked with a great bunch of people - all have moved on to become cops. It was such a fun job, if not the best. My first morning on the job within 15 minutes of opening,  I spotted someone stealing and from then on, my name had a permanent place on the leader board. I seemed to have a natural talent for spotting shady people, and the fact I fit right in the customers gave me the element of surprise. I looked forward to work everyday. But then my co-workers all moved to police work, I got divorced, and moved on.
On LIVE PD, Saturday the 14th, they were following a woman that had "allegedly" shoplifted 3 bags worth of stolen items. As time was running out on the show, I was worried the show would end without being able to see the conclusion of the Walmart thief. I was so excited. And when they apprehended her, I was relieved.
Sunday, I was working at Giant when the manager began noticing someone stealing items from bath/beauty area. His nickname for me is "Mrs. Columbo" because I have an eye for shoplifters and have prevented or stopped quite a few. "Mrs. Columbo - get ready to call the cops." He pointed rolled up papers at me like a baton and then said, "Come with me."
Well, my blood was flowing, my boring day turned into an important day. YES! We were on the hunt. All of the managers were in on it and, in the end, the would be shady 'shopper' dumped the goods and left, which was technically a win.
After that incident, I walked back to the service desk and between the Walmart job on Live PD, the incident at the store, I knew I was wasting my time at the front desk.
In fact, a few weeks prior, I'd sat down with my manager and told him I was tired of all the shady customers I was seeing at the front desk.
The "lost receipt" on this empty bag of frozen shrimp that tasted bad (yet they kept eating it!). Or the people that return canned items from food banks (food that we don't even carry). My boss told me these shady customers were built in to the system, and that I shouldn't let it bother me so much.
But it does.
I grew up with parents trying to teach me from right and wrong.
As a teenager, movies, songs, books, encouraged readers/watchers/listeners to rebel against tradition. And lately, it seems everything is backwards and growing even more so: criminals have excuses declare themselves victims, good people are painted as evil people.
Most of my customers at the front desk were wonderful, honest people, but those shady people frustrated me.
On Monday I was supposed to try a 2 hour cake frosting class at Giant. But I didn't want to do it. I didn't want to go back to bakery. And after watching that Walmart job on LIVE PD and our little caper on Sunday, I did something I rarely do. I called and said I wasn't going to take the class after all. And then I used those hours I would have been working to apply to a few loss prevention jobs. My computer wasn't working, but I didn't give up, I used my husbands computer to apply. Within 15 minutes I received a phone call from one of the companies (one of best in asset protection in the business). Interview on Wednesday, luck was with me, the second manager was there so I was able to have my second interview, and was hired.
It was all I could do not to turn cartwheels on my way out the door. (Because I'd have ended up in the hospital and unable to work both jobs!)
The next week I'd taken off vacation (months prior as my family was shore-bound), so, in essence, I had three more shifts and at Giant and I was done.
It's amazing how life can change for the better in a matter of days. I'm frustrated I didn't figure out where I belonged sooner.
No matter where you are, if you're stuck in a rut, pay attention to things that happen around you, take action, and never give up hope!